The Magik Theatre has been a part of downtown San Antonio since 1994, serving over 2.5 million visitors in the past 25 years.

Below are major accomplishments in the theatre’s history. 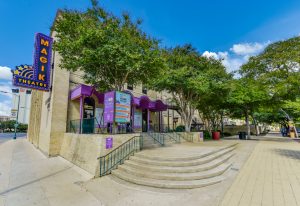 “There’s never going to be a theater audience unless you educate young people. That’s how the Magik was born.”

1994 – Richard Rosen gathers a group of six actors and forms The Magik Theatre.

1994 – THE JUNGLE BOOK is the first production of The Magik Theatre, a professional repertory company for young audiences and their families.

January 1996 – Original musical production THE PHANTOM OF THE ALAMO, by Richard Rosen, opens.

May 2017 – The theatre’s first annual gala, A Night of Magik, is a celebration of Magik’s past, present and future.

October 2018 – Magik Theatre celebrated the opening of our 25th Anniversary Season with the production of Schoolhouse Rock Live!

May 2019 – A Night of Magik Annual Gala, A World of Pure Imagination, raised over $50,000 and featured live performances from Magik’s talented actors and guest performers. Attendees were treated to a delicious display of appetizers and drinks generously donated by GLI Beverages, Republic National Distributing Company, Tito’s Handmade Vodka and the event sponsor, Piatti.